YOUR BROWSER IS OUT OF DATE! 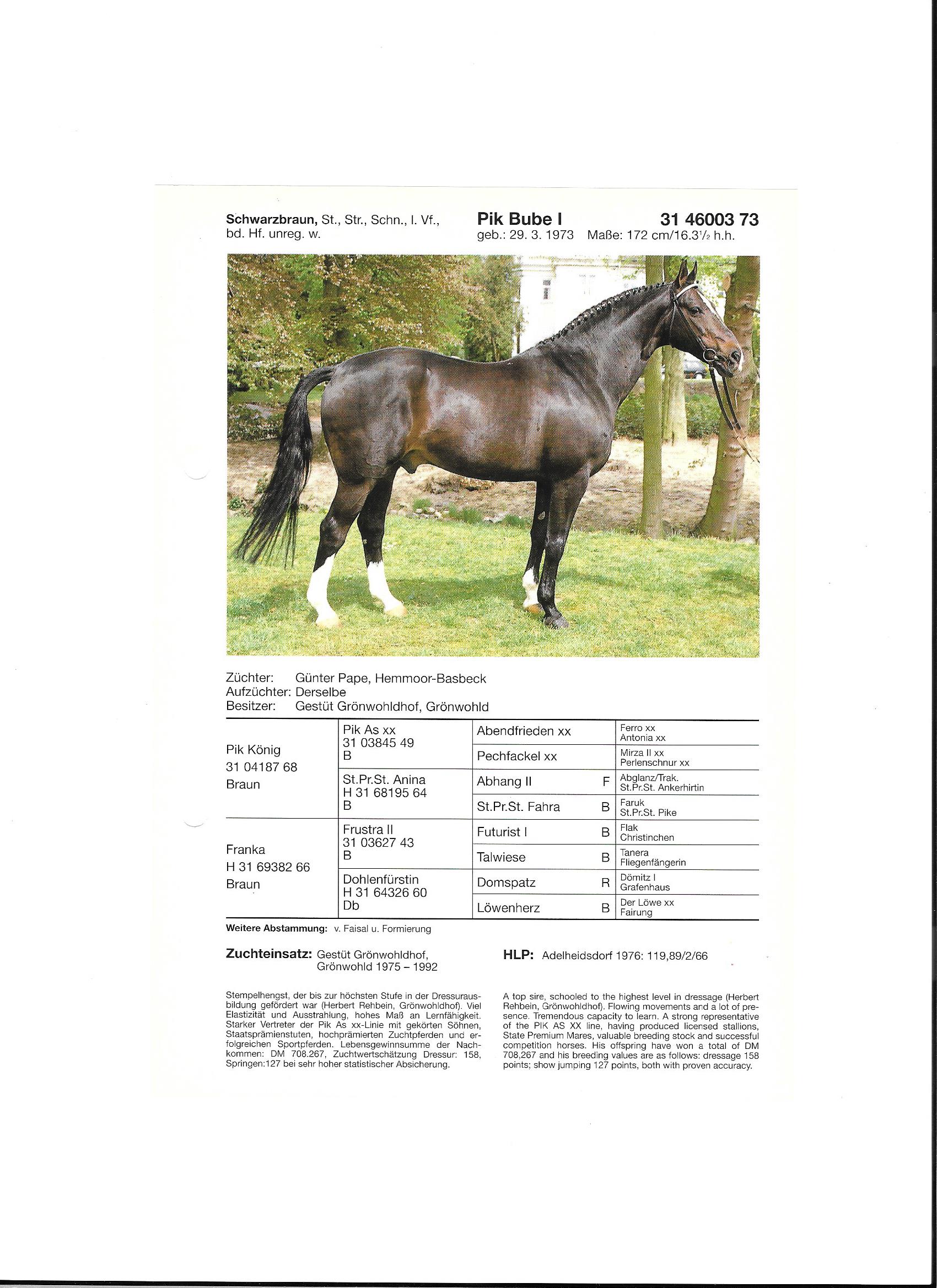 Wunderschöne Pferde- tolle Oldenburger, 2 von diesen sind uns besonders verbunden: REGALO und die wunderschöne BISCAYA und ihre unvergessene Mutter AUDREY - wir freuen uns sehr, durch diese Pferde immer noch eng verbunden zu sein mit ihren Züchtern, ihren früheren und jetzigen Reiterinnen und Besitzerinnen 🐞🙏🍀🙏
HORSES CONNECTING HUMANS:The recent 2012 US Young Dressage Horse Championships were a resounding success for breeders, owners and riders of German registered Oldenburg horses in NA. In the 4 and 5 Year Old age groups Oldenburg horses were at the top of the field bringing home wins and multiple championship titles. These competitors are athletic and beautiful sporthorses that are being rewarded for their high rideability and outstanding gaits. Not surprisingly many hail from the most prestigious and revered dam lines in Oldenburg. We are very proud of their successes and congratulate all of the people involved in creating, developing and showcasing the talent of German registered Oldenburg’s in the USA.

The four-year-old championship title was won by OHBS-GOV NA bred Oldenburg stallion Hemmingway sired by Hofrat out of St.Pr.St. Alsonara by Archipel/Weltmeyer partnered with Michael Bradgell from MD. Hemmingway was awarded 8.5 for walk, 8.0 for trot and 8.0 for canter. He also earned an 8.3 for submission and 8.5 on general impression, securing the championship title. Hemmingway was bred a long time, cornerstone OHBS-GOV breeder, the late Angela Barilar of High Point Hanoverians. Hemmingway’s dam, St.Pr.St. Alsonara was a Brilliant Ring mare at Rastede, and earned scores of 9 on her trot and canter at her Mare Performance Test. Hemmingway is owned by OHBS-GOV breeder Theresa Schnell of Rock Solid Warmbloods who selected the talented stallion as a foal and purchased him from Angela.

In second place was another OHBS-GOV NA bred and raised stallion; Qredit Hilltop by Quarterback out of Vb.Pr.St. Dream Rubina by Dream of Glory/Rubinstein I, he was partnered with Christopher Hickey from MD. Qredit Hilltop earned an 8.4 on the walk and 8.0 for his trot and an 8.0 for his canter. He also received an 8.2 for submission and 8.5 for general impression. Qredit Hilltop was bred by another keystone OHBS-GOV breeder in NA, Judy Yancey of Yancey Farms. Judy also bred Qredit’s dam Dream Rubina who presented in 2007 to the German Oldenburg Verband and was awarded Verband’s Premium Status. Qredit Hilltop is owned by Hilltop Farms who have guided these talented young stallions in hand and under saddle careers.

Both of these first and second placed young Oldenburg stallions have been granted their Provisional Breeding License’s from the GOV with full approval pending the completion of the 70 day tests this fall. It speaks to the integrity of our NA system that as foals they were identified as Premiums, selected as breeding candidates and are now the leading the country as young dressage horses in sport.

In fifth place another lovely Oldenburg stallion displayed his talent. Supremat OLD sired by Sandro Hit out of Granada by Rubinstein I/Feingau, was partnered with his owner Jason Canton from GA. Supremat finished with a solid 7.92 to secure his top 5 finish in the large group of the top 4 year olds in the country. Bred by Stall Troff, in 2011 the Licensed Oldenburg stallion was the Reserve Oldenburg State Champion at Rastede and the 3 Year Old Stallion Reserve Bundeschampionate with Johannes Westendarp. Jason and his partner Julia Martin discovered Supremat at the 74th Elite Oldenburg Auction in Vechta, Germany where they purchased the talented stallion. We are very proud to see the success continue and expect more great results in the future.

It was déjà vu in the Five Year Old division with the first and second placing’s going once again to German Oldenburg horses!

First place was won by the talented German Oldenburg gelding Regalo by Rosario out of Dandiell by Nandino xx and was ridden by Oldenburg, Germany native Lientje Schüler from CA. They were the clear winners scoring an impressive 8.16 in the final test. Regalo received 7.5 for walk, 8.8 for trot and 7.9 for canter as well as 8.4 for submission and 8.2 for general impression. Owned by Pinky Roberts the talented gelding has seen much success with Lientje this year. Regalo was bred in Germany by Oldenburg Stallion Licensing Committee member Ulrich Henschke. Lientje’s parents made the special trip over from Oldenburg Germany to see their daughter win upon this talented Oldenburg gelding.

Second place was captured by the gorgeous German Oldenburg mare St.Pr.Ca. Elfenfeuer by Florencio I out of St.Pr.St. Elfensonne by Sion/Figaro and her rider Alice Tarjan. They collected the Reserve Champion title scoring a 7.4 for walk, 7.9 for trot and 8.0 the canter. They also earned a very impressive 8.5 for submission and 8.2 for general impression. St.Pr.Ca Elfenfeuer was bred in Germany by Ewald Grotelueschen and hails from the successful Elfi dam line who has been invited to Rastede time and again. St.Pr.Ca Eldenfeuer was Mare Performance Tested in Germany prior to her sale and importation to the US. She sold to NA at the 2010 Winter Mixed Sale Auction in Vechta and has clearly made a wonderful partner for Alice.

Placing fourth was the lovely German Oldenburg mare Horizon by Hotline out of El.St.Pr. Revue by Don Schufro/ Inschallah, with her rider George Williams from OH. They finished with a 7.68 in the final to secure their top 5 finish in the field of 14. Horizon was bred in Germany by Frank Grote and sold to Williams’s long-time supporter Betsy Juliano as a 3 year old at the 2010 PSI Auction. Horizon descends from the famous Oldenburg dam-line of Rulliane and has been brought along for the last 2 years by Williams.

In the Six Year Old division the powerhouse German Oldenburg mare Sp.Pr.Ca Biscaya by Johnson out of St.Pr.St. Audrey by Argentinus/Goldstern placed 7th overall with her long time rider Ulla Parker of MD. Sp.Pr.Ca Biscaya was bred in Germany by Claus Hueppe and discovered as a foal by OHBS-GOV breeder Nancy Holowesko of Crosiadore Farm. Nancy purchased the now famous mare as a foal at the 2006 Fall Elite Auction in Vechta. Sp.Pr.Ca Biscaya has enjoyed great success in her short career including receiving an 8.14 during her OHBS-GOV Mare Performance Test back in 2010.

We are so thrilled with the fabulous results of German registered Oldenburg horses at this National Championship. Although they were heavily outnumbered by horses from other studbooks, Oldenburg horses truly shone in the ring and dominated the top positions in the 4 and 5 year old divisions. It demonstrates the strength of the OHBS-GOV breeding program and its very successful foundation built upon the highest quality dam-lines. ... Mehr anzeigenWeniger anzeigen

Brilljand is a real eye-catching, masculine type of foal. He always presents himself very well and is interested in his ...